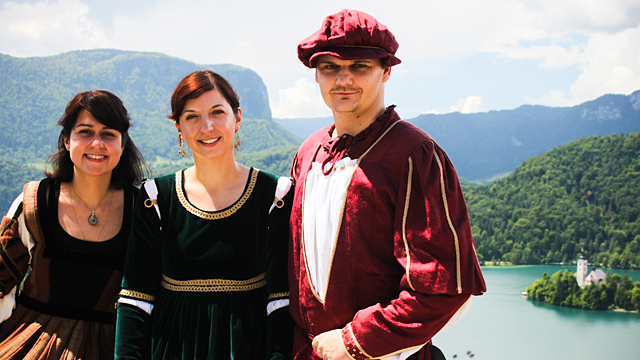 One year ago in May I was at the Medieval festival in Western Ukraine, I went there because I do enjoy medieval music and the atmosphere. That was the first time when I saw people dancing some medieval dances, I liked that so much but it was impossible to find some people who dance this kind of dances in my hometown.

Here, in Škofja Loka, I accidentally mentioned to Matjaz that I liked all that medieval stuff… and “Oh, miracle!” There is an association in Škofja Loka where a group of people have been dancing medieval dances about 8 years – Kulturno družtvo Lonca.

The dancing group was so nice that they allowed me to join them, so since January, almost each week, I have one lesson of dances during 1 hour and a half. The cool thing is that lessons are held just a few buildings away from our EVS flat. :)

For now I had 2 performances with the group: first was in Karlovac (Croatia) and the second one in Bled (Slovenia). The third one is coming soon – Historial Škofja Loka, 22nd of June. Everybody is welcomed to watch us dancing!