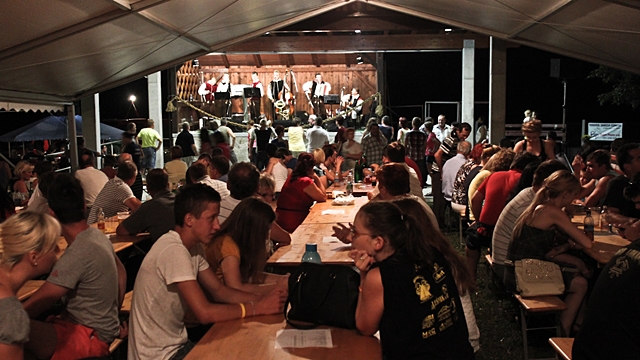 When I’ve heard about “Fireman party” for the first time, I laughed a lot because I couldn’t believe that it existed. So there are countless amount of Fireman parties all over Slovenia during the whole summer, they usually happen in the villages or small towns. Fireman party means drinking, eating, dancing traditional dances, playing music on accordion and of course being drunk as much as possible. They say if the fireman party is successful they buy a new fireman car, if not – they sell the old one. :-)

I guess I’ve heard a funny statistic like there is 1 million of firemen for the country with the population of 2 million, but now I checked it’s 15% which is quite a lot anyway. Usually all firemen are volunteers, it means that they have another job for which they are paid, only in big towns there are some professionals. Also as I understood that not so many fires are happening, so almost each year there is a crazy-drunk fireman, who set up a real fire to have some work.

The pictures are from a fireman party which we accidentally found somewhere in Štajerska. If you don’t drink on this party anyway you look drunk on pictures as I do. :)