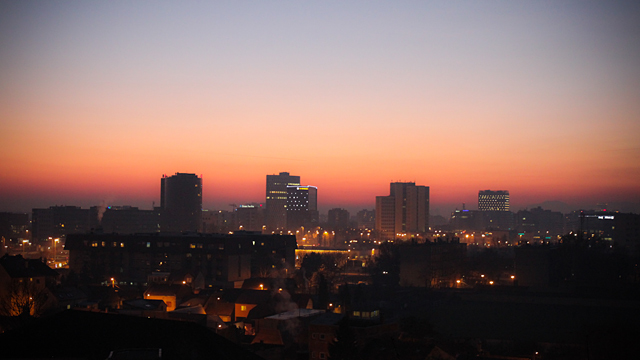 “When in Rome, do as the Romans do”. I would say “When in Slovenia, do as the Slovenians do”. Considering this saying on 30th of December I had to go to Croatia, because in my case “my” Slovenians went to Zagreb for New Year night. :)

I stayed in Slovenia during this winter holidays. But as I like places I haven’t seen before I was very glad to travel to Zagreb! The plan was to go there with Matjaž’s friends (6 guys and 2 girls). But girls decided to come to Zagreb one day later. So on the Croatian border we had a situation like six Slovenian guys over 30 years old and one Ukrainian girl are crossing the border in one big van for spending New Year night in Zagreb. The situation seemed a bit funny if you are aware of the reputation of Ukrainian girls in Slovenia… :-/

Zagreb
I just liked Zagreb. During the 31st of December the weather was sunny, the town was overcrowded and it seemed that there was more fun in Zagreb than in Ljubljana.

We walked all day long, I saw almost everything that I planned to see. I would like to mention some facts about Zagreb and Croatia that I didn’t know before:

New Year night
Almost all “members of our New Year team” decided to stay in the flat. Only Matjaž, Cene and me went to the main square of Zagreb to celebrate New Year there. Of course we left the flat a bit late and of course we were in a hurry all the way. In the tram we met one nice Croatian couple from Pula (now I only remember the name of the girl – Petra). We continued our “trip” with them… but we didn’t reach the square until midnight despite the fact that we even ran. He-he, I remember that we opened champagne in the middle of one street close to the city center.

After all we came to the main square – Trg bana Jelačiča where was playing an old famous Croatian “punk” band – Prljavo Kazaliste (Dirty Theater).

During the 1st of January the weather was really nasty, Zagreb was empty… and the best idea which crossed our minds was to go to the cemetery, which is quite popular among tourists. I can say that this graveyard reminded me museum under the open sky… so if you have a possibility – go there and have a look. :)