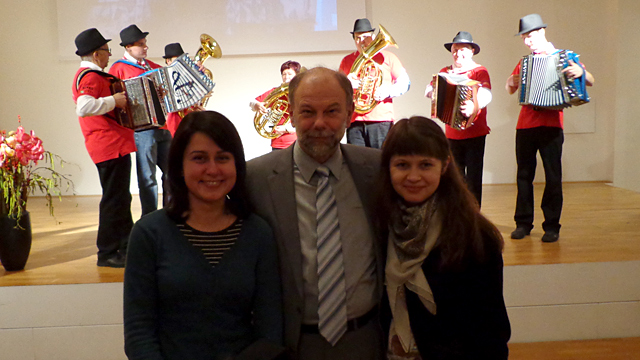 As they said it’s a not big deal to meet a mayor of some small EU town personally. But for me it was quite an event, he-he :) Unlike Europe we still have that a distance between citizens and government.

Miha Ješe, mayor of Škofja Loka, appeared to be smiling, friendly and Russian-speaking (!) man, since he had been working for 5 years in Moscow.

We met accidentally at oppening evening of 38th Pokal Loka – alpine ski competition for children, which is each year hosted in Škofja Loka – a closed event with free-food. :) All EVSes have a scent for such things, if they don’t have a scent – they have a good EVS coordinator who has this scent! :D This time we also took one more EVS volunteer from Ljubljana – Ania from Russia, who came to visit me on that nice evening.

Next day I went with Gapi to ski on Stari Vrh, where I had a possibility to see alpine ski competition for children – Pokal Loka. Here is the video of Pokal Loka 2012.