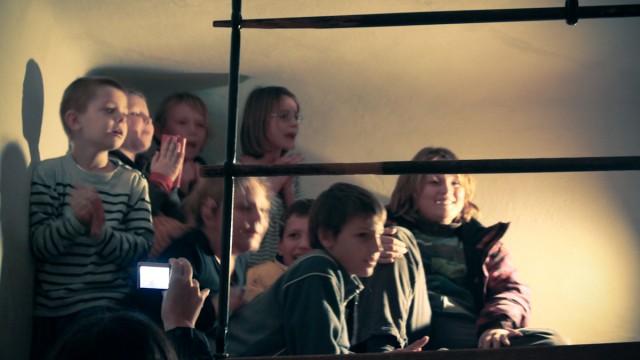 5th of December Silvia and me were kidnapped to see something special in one great family who live in Lipica. As I knew this evening was the St. Nicola’s Eve here but I didn’t have any idea of what went on this night in Slovenia. :)

I have to say a little bit about this family in Lipica. They have 8 adult children and these “children” made plenty of their own children. So for St. Nicola’s Eve there were like 20-30 of us in one house. I couldn’t understand what went on, I just saw the fear on kids faces, they were screaming and gathering together on a big real печь (an old countryside devise for heating the house). They were waiting for Beasts who would come to punish those who behaved bad during the year… Beasts appeared… About 8 men in good fabulous costumes made pretty cool performance for kids: they acted like they wanted to hit kids or to take them to the hell. Some of kids were crying, some were sitting on their parent’s knees and they even didn’t want to look at the Beasts (so much they were scared). But then children started to pray and asked St. Nicola to come to kick away Beasts… The end was happy. But it seems that some of those kids are still sure that everything was real. Watch the video by Silvia Prieto.

Then we went to Stara Loka where usually Beasts passed by during this magical evening and tried to hit some gapers. Some kids were really praying on their knees (my biggest impression of the night) in front of the Beast – so they didn’t touch them. You can feel this cool atmosphere by watching the video which was done by previous EVS (Marie Sergent).

This year everything was the same, except of the fact that Silvia and me got a very hard hit by a whip on ours legs from one Beast. And as I was explained later it meant that we had made some sins last year, otherwise we wouldn’t get any hits. Matjaž didn’t get any (lucky b…)