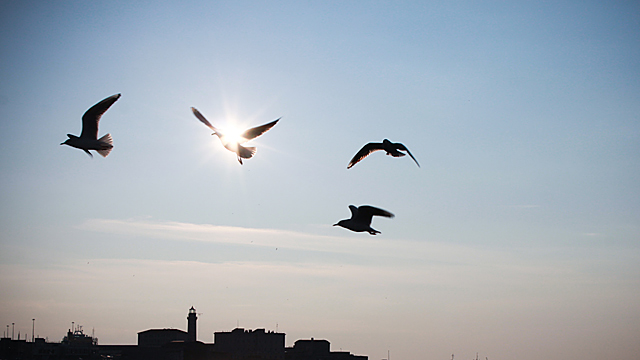 Janis, Silvia, Matjaž and me went to the airport of Trieste to deliver Matjaž’s friend there. She had a plane at 8:30, so we had to wake up at 5 a.m. Finally I could say to Silvia “buenas madrugada”! :D As I know Spanish people don’t use “good morning” because they can say it only before sunrise or right after that… and usually they sleep in this time.

We had the whole day to enjoy the sea coast and Italy. According to Matjaž’s knowledge of history, places which we saw belonged to the Austrian Empire, the coastline was settled by the slovenes and the port of Trieste was partly slovenian before World War I. We went to Grado – the town on the lagoon, Fogliano Redipuglia with the huge cemetery of Italian soldiers died during World War I, Duino Castle and Miramare Castle.

Next destination was Trieste, which has appeared to be the town for one day trip. I was a bit disappointed with the beach I found there – no decent beach :), just huge stones. Another fact not in favor of Italy is that Italian prices are unpleasantly higher than Slovenian. I noticed the more I travel to Italy the less I like it – the country which used to be my favorite one.

On the way back we took a road via Koper. I fell in love with this town, honestly, I can say that this is the first place in Slovenia which I liked since the first sight. It reminded me Crimea a little bit. The most important thing for me in the town is the energy and the way I feel in this place… I felt peacefully. :) Besides it, Koper has more or less good beach among all beaches I saw in this part of Adriatic shore until now. I definitely would like come back there during the summer time for spending days under the sun and for drinking an amazing Koper vine – Rumeni Muškat.