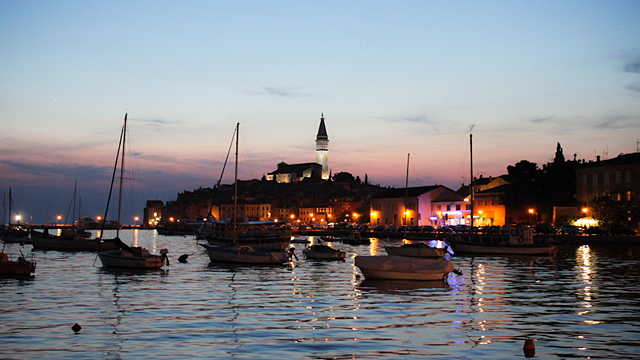 The season of swimming is open! Janis, Ani, Matjaz and me had a cool unplanned trip to the Croatian sea side: Bale → Rovinj → Pula → Poreč → Vižinada → Motovun → Buje.

The main destination was Bale, quite “wild” resort with camping, in the past the place was well known as a hippie place. The water in Adriatic sea is nice, warm and clean, but the coast is the worst I’ve stepped on. Almost each of us damaged feet a bit. So it would be smart to take some special shoes next time. We came to Bale around 3 a.m. and slept on the beach.

In the afternoon, not to stuck at one site we made trip to amazing venetian Rovinj and almost roman – Pula. Next day we saw another resort – Poreč and a small village Vižinada, which was pretty much destroyed just for the Hollywood movie about World War II – “Kelly’s Heroes” with Clint Eastwood. Also we visited a nice town Motovun, which is located on the high hill in the middle of nothing. :) The trip was finished with a good cheap dinner in Buje. The travel lasted 48 hours, the funny thing is that we came to Škofja Loka at night, exactly at the same time when we left it for Bale. :)

I love Croatian sea coast and towns situated near by. They are colorful, jolly and romantic at the same time. They remind me Venice a lot, and there is no wonder in it, because Croatian Istria had been belonged to Venetian Republic during a few centuries.