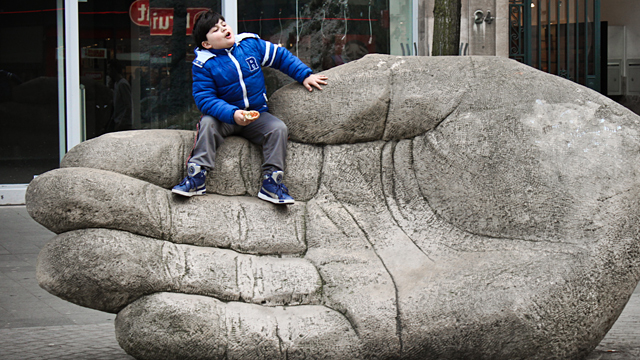 Amazing train station. The smell of the zoo next to it. Thousands of shops. They have everything. Guy plays an old piano in the street. Impressed by his composition. Took a way to see Rubens house. To visit the main cathedral people have to pay. A long embankment. The view of the opposite side of the river reminds me my hometown. The castle Burg Steen. I overheard like two girls were talking in Russian that they would like to have a common picture. Too many Arabs. A bit disappointed with Antwerpen. Back to train station.

Evening in Brussels
Approaching to Brussels Nord train station. Accidentally, out the window of the train, I saw some kind of “red light district” with whores. Brussels. Around 20:30. A long boulevard. No women, just men. Finally at Wouter’s dormitory. Wouter appeared. Wilson, Wouter and me are walking to the students party in one girl’s flat. About 40 Dutch and Belgian (Dutch speaking) youngsters. Disguised. Leffe beer. Talking. Dancing area in the basement. Underground style. Decorated with Dutch flags. Most of the youngsters are video makers. One guy must be a director in my opinion. I discover that he studies to be a director :). Communism is not a sensitive topic for me :). Everybody drinks Jupiler beer. Dutch speaking and French speaking youth in Brussels don’t party together. The party hostess shows us her room. XIX century style. I was told about Belgian stereotypes: “Chocolate and sexual abuse of children… probably that’s why we have so much chocolate”. Comming back to the dormitory.