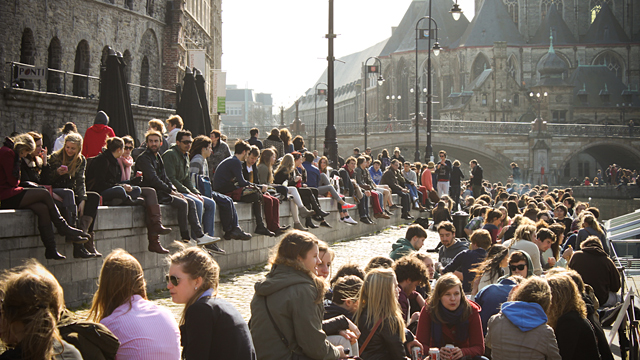 In Gent. 21:00. Funny train station. Walking a lot to Chema’s place (3 km). Old Flemish dormitory. Chema is a really great guy as Škofja Lokars used to say. He is so talkative. Trappistes Rochefort beer. I go to see Gent. Midnight. Nice smiling blue-eyed BeNeLux guy gave me the best explanation ever – “just follow the railway until you see the channel, then follow the channel”. Gent looks like a fairy tale. A bit drunk. Trying to take some pictures in the darkness. Gent is mine. Just me and police on the empty squares of night Gent (after all it’s Monday). I found the way back without a map. I think I saw guys stealing a bicycle. Chema has a guest. They say that there are more than 1000 kinds of beers in Belgium.

Morning. +19 degrees. Town is full of youngsters. I guess they adore to seat close to the river. People are in the shorts and skirts. Girls are without tights! The famous Ghent Altarpiece. Wondering about the point of building four huge churches in front of each other. Red-haired man noticed that I would like Gent more than Antwerpen (he was right, he-he). River trip. It seems people on the embankment have never seen people who are doing a river trip. Gravensteen castle outside. Buying some stuff in secondhand shop. Took a wrong way to find one shop. Walking useless 40-50 minutes. Finally at home, goodbye to Chema. Walking to the train station (3 km). 21:00.

Evening in Brussels
First meeting with Wilson. Walking from train station to the lodging for the night. Wilson is really cool and kind :). Meeting with my first couchsurfer – smiling Dutch Wouter. Got the key. We go with Wilson to meet Brunel (haven’t seen each other almost 3 years). Delirium bar. Overcrowded. We are lucky to have a sit. Duchesse de Bourgogne – the best beer ever. They say “there are some streets in Brussels where woman is not allowed to walk alone”. Brunel and me took that street :). Accidentally met Wouter at the door of the dormitory. Good modern dormitory. Sleep, finally.