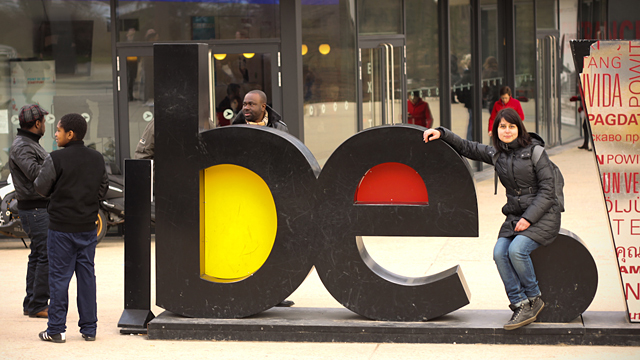 Charleroi airport. Strange queue to the shuttle bus – people are trying to force one’s way. Luckily in the bus. Brussels. Around 23:00. Midi train station. I think I took a wrong flight – I’m in Africa. Walking to my hostel (3 km). Dirty streets. Too many Afro and Arab people. Huge flashy city. I like it. Took the way to see Manneken Pis. Cute one. People are in the pullovers! “Espanola?” Gorgeous Grand Markt by night. Impressed. Finally at my hostel 2Go4. So tiny room. 23:45.

Morning. Meeting with Gauthier. Haven’t seen each other for 3 years. Moving to 4 star hotel – The Dominican. Wow! Feel like a rich person. Walking around Brussels. Grand Markt. Touching “golden” female statue for the luck. Shopping streets. Streets with restaurants. Have a look at the cool bar “Delirium” with thousands kinds of the beer. I love the atmosphere in Brussels. Royal Palace outside. Wild fox is licking itself in front of the Royal Palace. Still no rain :). Took a metro to Atomium. Climbing up. The guide accompanies us in the elevator, explaining something about Atomium in a few languages – the worst job ever. Brussels from above. Park Mini-Europe from above. It’s enough to see this park just from above. Returning to hotel. Turkish sauna, he-he. Going out. Crazy range in the shops – welcome to Western Europe. I don’t like cherry beer Kriek. Beer with a pink elephant – Delirium, the best beer for now. Trying shitty beer Jupiler. If somebody tries to sell you flower on the street, french people usually answer: “No thank you, we’ve already fucked”. In Greece Greek pita is tastier. Rock Cafe – have seen better. A lot of police cars. Trying to find a recommended bar “Le Corbeau”. A guard asked for 2 euro for the reason of safety. Aaa! People are dancing on the tables! Beer Duvel. We are dancing on the table. Funny night. 2:00. Coming back to the hotel.

Morning. A little hangover. Posh breakfast at the hotel. Famous french actor in pajamas and with a laptop – Dany Boon. Gauthier is speechless, he-he. Canceling meeting with Valerie. Walking to European Parliament (5 km). Nice museum there. Walking to Parc du Cinquantenaire with an arch (2 km). Tired but walking back to the center (4 km). A bit cold day but still no rain. I like Belgian architecture. Waffles are so tasty! I don’t like typical fried potatoes. Gauthier is leaving for home to Lille. Coming back to hostel. Alone since 19:00. No sms for me. Going out to eat something. The dirties way of making sandwich I ever seen. I bought that sandwich anyway but I couldn’t tried. Left it on the street. Walking a bit more. “Mademoiselle”. “Ca va?”. Came back to the hostel.

Shopping day. The weather is +16. It seems that the Belgians like to buy and to eat the most. One of the best shopping place ever. Lost in a store “Inno” for a while. Bought the last coat in Brussels. 60% discount. The old seller tried to arrange a date. Brussels is too multicultural and international. Evening. I’m buying ticket to Gent. A man in the ticket office said Gent with Ukrainian pronunciation. :)