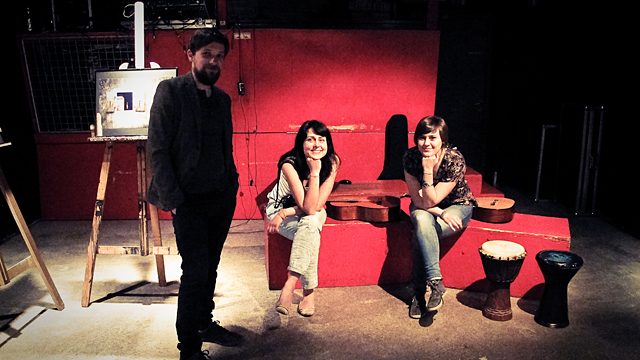 Each month there is a photo exhibition in Ostriga. Silvia and I were asked to present our pictures in May. We chose “Windows” as a topic since we used to take pictures of windows in different countries before. Silvia’s windows are from: Slovenia, Croatia, Italy, Argentina and Uruguay. Mine – Croatia, Greece, Portugal, Italy (the former Austrian part).

Mito Gegič, an artist who lives in Škofja Loka now, was the first one who saw our pictures. Without knowing which pictures are Silvia’s and which are mine, he paid attention to two of them, and called both of them perfect. One picture was Silvia’s, another was mine. :-)

I really liked this event, I guess people had a good time also because of the musical performance by Erhan and Janis. Erhan made a cool sound from our pictures using one special computer program, then guys improved it by live playing.

Now our pictures are hanging the whole month in Ostriga.