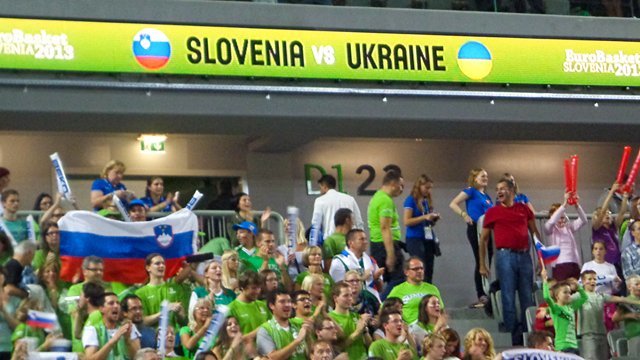 Brunel Muba, a guy from Belgium, surprisingly appeared in Škofja Loka a few weeks ago, telling that now he worked for EuroBasket 2013. Brunel is the person who me and Matjaz met before we knew each other: Matjaz met Brunel in France in 2009, I met – in Portugal, 2010. Well, I’m writing about Brunel because thanks to him we got 2 tickets for the match Slovenia vs. Ukraine (5th place game).

It’s a pity that Ukraine lost, the difference was just 6 points, but the good thing is that our team was a surprise of EuroBasket, nobody expected it to play for the 5th place. Otherwise I’m glad for Slovenians who were hosting this competition and who had a real star in their national team – Goran Dragič.

But there is always something that I don’t like ;), this time it was the sound of voices and screaming which Slovenians (99,9% of the public) produced whenever some player of Ukrainian team touched a ball.

P.S. Since we were sitting in the first raw, some people saw us on TV. :-)