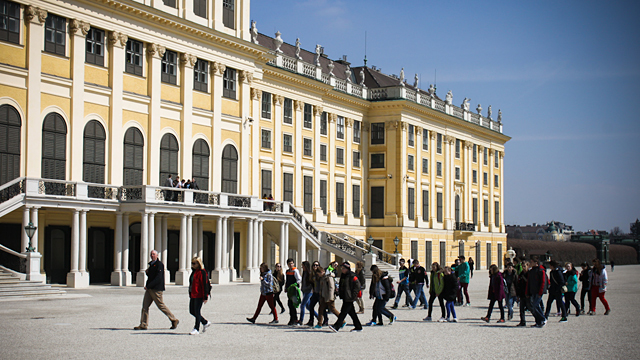 City of the trip: Vienna.

Vehicle of the trip: Train. One way costs 29 Euro and it lasts 6 hours.

Person of the trip: Hana Šinkovec. Hana was our teacher of Slovenian language, at the present moment she is studying in Vienna. It was so cool to stay at her place, it gave me a possibility to know Hana much better. :)

Unplanned showplace of the trip: Spittelau incineration plant designed by Hundertwasser. It was pure accident, I noticed it from the window of the taxi on the way to a night club which was in the same area.

Night club of the trip: Pratersauna. At first night of my arrival we went to a night club with Hana and some Austrians whom she knew before. The entrance was 10 Euro, the club was cool and full of people. And I made a conclusion that Austrians are crazy about brunets. :)

Celebrity of the trip: Richard Dorfmeister. I was told that this DJ is a “father” of electronic music in Austria. He played in the night club where we went in my first night there.

Opening of the trip: Metro works 24 hours during weekend.

Surprise of the trip: Accidentally meeting with Hana at the metro station.

Music of the trip: Michel Cleis – La Mezcla, advised by one Austrian guy.

Name of the trip: Wolfgang. :)

Church of the trip: St. Stephen’s Cathedral. The hugest cathedral in Austria.

Street music of the trip: Con Te Partiro. In the center of Vienna one guy in the suit was playing cello.

Mood of the trip: Unexpectedly pleasantly impressed by nice Vienna.

Movie of the trip: Beginners. Advised by Hana.

Adrenaline of the trip: Metro. One metro trip costs 2 Euro… but I decided to take a risk and not to buy tickets during 3 days. The penalty would be 100 Euro.

Amusement park of the trip: Prater. I really enjoyed 2 amusement “devices”, also I used 100 year old ferris wheel which was quite boring.

River of the trip: Danube by night.

Attraction of the trip: Schonbrunn Palace. Gorgeous, impressive, huge. Though I wasn’t inside of the palace, I was very touched by the park around it.

Game of the trip: Maze. There is a maze on the territory of Schonbrunn which made me feel like Alice in Wonderland.

Disappointment of the trip: Zoo. The oldest zoo in Europe looks really nice and I always wanted to see it. But when I saw those huge eagles in the small cages staring with sadness on the wild ducks freely flying above them… I guess only koalas enjoy their staying in the zoo. :)

Cake of the trip: Mozart. The famous Viennese cake is Sacher, but since I tried it before (in Slovenia), I decided to try something new. Mozart cake has exactly the same taste as Mozart chocolates.

Museum of the trip: Austrian National Library. There are about 3 and a half million books there.

Building of the trip: Hundertwasser Haus. The guy who was dissatisfied with socialist buildings designed really nice house of his taste.

Car of the trip: Fiat. Just a lot of Fiat cars on the streets.

Bar of the trip: Reggie jam session. The only place where I met afro people in Vienna.

Shopping of the trip: Mariahilferstrasse. A posh street with a lot of shops.

Purchase of the trip: Funny bag with the sign “No kangaroos in Austria”. I’ve heard that sometimes Americans confused Austria with Australia and they complained that they couldn’t find any kangaroo.

Gift of the trip: Photos. By a stroke of luck I found the old photo machine which makes 4 pictures of you for 2 Euro. I’ve done it once in my life when I was 7 year old in Sochi and since that time I have been dreaming to have this kind of photography again.

Weather of the trip: Two cloudy days and one extremely sunny day.

Unrealized plan of the trip: Haus der Musik. No enough energy and time to go there. :)

Conclusion of the trip: Vienna must be visited.